Pete Wishart Spreads The Word About Type 1 Diabetes in Parliament 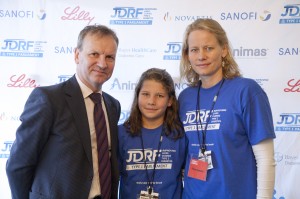 The Scottish National Party’s Mr Pete Wishart MP showed his support for JDRF, the world’s leading type 1 diabetes research charity, by attending the ‘Type 1 Parliament’ lobbying event which took place in Westminster on 25 April 2012. Mr Wishart attended the event alongside 50 other MPs, and spoke to adults and children about living with type 1 diabetes. Type 1 diabetes is a serious autoimmune condition that causes the body’s own immune system to turn on itself and attack cells in the pancreas, which produce insulin.  The condition affects about 300,000 adults in the UK, including over 26,000 children and requires multiple daily insulin injections and finger prick blood tests to manage. Commenting on the event Mr Wishart said “It was great to be able to welcome my young constituent Clara Cameron and her mum Fiona to parliament.  Clara came along  as the representative of young people in Central and Southern Scotland and she was a wonderful ambassador for all young people with Type 1 diabetes. “New medications and new technologies help ease the difficulties of living with and controlling diabetes but it would be wonderful if a cure could be found.  That can only be achieved by research and I am happy to support Clara’s calls for more funding for research into Type1 diabetes.”