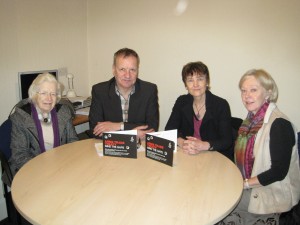 The Scottish National Party’s Mr Pete Wishart MP, Member of Parliament for Perth & North Perthshire, has given his backing to Amnesty international’s campaign for a tighter Arms Treaty.

Speaking after meeting with representatives of the local Amnesty group, Mr Wishart said:

“Amnesty International are a fantastic organisation doing really important work throughout the world highlighting and campaigning on human rights issues such as torture and political prisoners.

“They have, quite rightly turned their attention to the need to improve the way the arms trade is regulated to prevent these arms and security from contributing to human rights violations and I had a very interesting discussion today with local campaigners.

“Governments must introduce tighter controls and monitor their arms and security exports more effectively, making information on arms transfers available to the public. National measures to control the trade in arms and security equipment must be supported by regional and international regulations.

“Making the arms and security trade more open is vital. In the UK, the Government has produced an annual report on arms exports since May 1997. Although this is a positive step towards being more open, the reports do not contain the level of information needed for parliament and the public to examine effectively the Government's record on arms controls.

“No matter how full and open these annual reports become, they are still only useful in checking the Government's record after export licences have been granted. I support Amnesty’s call for a parliamentary committee to be set up to advise the Government on applications for export licences to countries where we have human rights concerns, before the licences are granted.”