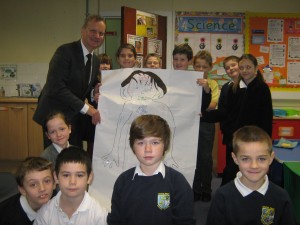 The Scottish National Party’s Mr Pete Wishart MP, Member of Parliament for Perth & North Perthshire, paid a visit this morning (Monday) to the Primary 5 class at Coupar Angus Primary School to talk about his role as a member of Parliament and the work they have been doing on their current topic, Global Education.

Speaking after the visit, Mr Wishart said:
“It was a pleasure to accept the invitation from the Primary 5s at Coupar Angus Primary to visit them and talk about both my work as an MP and the issues they have been learning about in class around their current topic, Global Education.
“As a result of that work they have decided to give their support to the ‘Send my Friend to School’ campaign, a really worthwhile cause which raises awareness of the number of children around the world who are not able to go to school.
“United Nations estimates show that there is a global shortage of 1.7 million teachers, with 1 million professional teachers needed in Africa alone.
“A lack of qualified teachers is only one of the many reasons why children around the world are missing out on education abd in 2000, world leaders made a promise that every child would receive a quality primary education by 2015.
“Despite that pledge, there are still over 60 million children missing out on even a basic primary education, with millions more struggling to learn in crowded classes and with unqualified teachers.
“A good education gives children opportunity and I was delighted by the passion and understanding that the young people in Coupar Angus have shown in engaging with this campaign.”
Back to All Press Releases