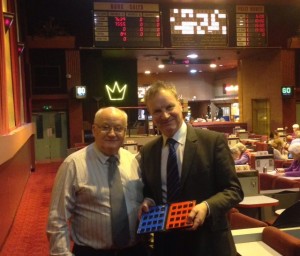 The Scottish National Party’s Mr Pete Wishart MP, has welcomed the decision by the Chancellor of the Exchequer, in this week’s budget, to reduce the tax burden on bingo clubs from 20% to 10% following a long campaign which he had supported.

The Boost Bingo campaign, run by The Bingo Association, gathered more than 330,000 petition signatures from bingo players calling for the Government to reduce bingo duty.  Mr Wishart recently showed his support for the campaign with a visit to the Premier Bingo Club in South Methven Street, Perth, where he called the numbers in one of the games.

“I was delighted to support the Boost Bingo campaign in Perthshire.  Bingo brings adults of all ages together to socialise in a lively and fun environment, and I am pleased that all the pressure has paid off and a result has been achieved for those of my constituents who enjoy a game of bingo”

Mr Wishart went on to criticise the Chancellor for failing to use the rest of his Budget to help out those most at need, saying:

“Unfortunately, while bingo’s number came up and we were able to mark off another number on the card with the victory of another campaign to scrap the whisky duty escalator, we were a long way from shouting ‘house’ at the end of the Chancellor’s speech. Few Scots will be cheering this budget, as a whole.

“A couple of – very welcome – giveaways cannot mask the continued agenda of cuts and austerity which continues to clamp down on the household budgets of those already hardest pressed and also hampers the Scottish Government’s ability to help them.

“With real incomes being squeezed very few families in Scotland will be able to take full advantage of what is on offer.

“And with the welfare cap set to include pensions credit and savings credit which currently offer real help to poorer pensioners and will continue in an independent Scotland the Chancellor’s claims to protect pensioners do not stack up.

“Roll on the day when we are not dependent on the lottery of what voters in England choose but can elect our own Government to take the decisions that Scotland sorely needs.”