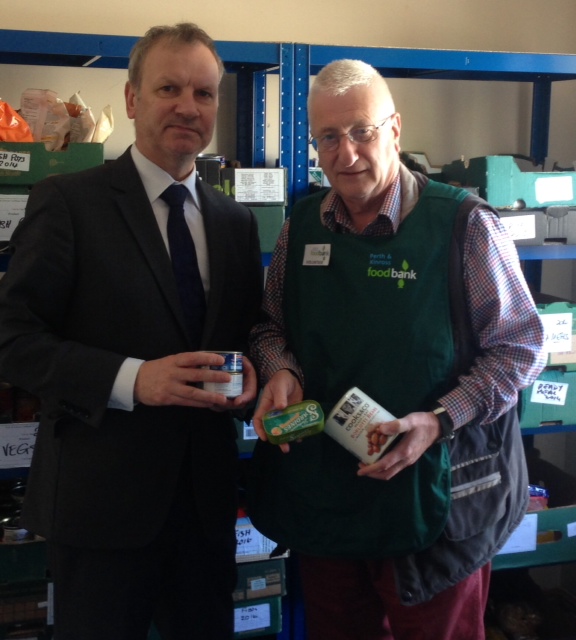 The Scottish National Party's Mr Pete Wishart MP, Member of Parliament for Perth & North Perthshire, visited Perth Foodbank where he discussed recent figures showing a 400% increase in Foodbank use across Scotland in the last year as well as the £1 million package of support for foodbanks from the Scottish Government that was announced at the SNP's recent conference and which will help foodbanks to provide the support that many people are now relying upon.

"Figures from the Trussell Trust, who run the Perth Foodbank, showing that the number of people using their foodbanks has increased by 400% in Scotland are a demonstration of the grim reality of Westminster’s cuts.

"Across Perth & Kinross, the figure is 1426 with over a quarter being children.  The increased demand here is demonstrated by the fact that since setting up in Perth, they have had to move to bigger premises and have opened satellite centres in a number of other towns in the sea.

"The Trussell Trust has rightly cited benefit changes, benefit delays and low income as the key causes of people in Scotland seeking support from their foodbanks.

“It is an absolute disgrace that in a country as wealthy as Scotland, Westminster’s actions are forcing so many folk to rely on foodbanks to survive.

“It is the grim reality of Westminster’s cuts but it doesn’t have to be this way and the referendum in September gives Scotland the chance to do things differently.

“While Westminster’s cuts are forcing people to rely on foodbanks, the Scottish Government is doing what it can to mitigate Westminster’s actions. That is why the SNP Government has announced a very welcome £1million package of support for foodbanks.

“Yet what Scotland really needs is the responsibility for our own decisions on tax and welfare so that people are no longer forced to rely upon foodbanks.

“With a Yes vote in September, we will be able to ensure that Scotland’s tax and welfare system reflect the priorities of people in Scotland and does not let people down as Westminster has so disgracefully done.”