PRAISES COMPANY ON PREPAREDNESS AND COMMITMENT TO LIVING WAGE 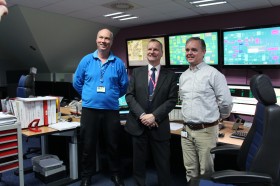 Mr Pete Wishart MP, Member of Parliament for Perth & North Perthshire, paid a visit to the Head Offices of SSE, a major employer in his constituency, this afternoon (Friday) during which he met with Rodney Grubb, Head of Operations; Dave Telford, Network Management Centre Manager; and Harry Hatton, Transmission Liaison Engineer.  Pete was given a tour of the Network Management Centre to explain how SSE operate their network in the north of Scotland, with a particular focus on network resilience, what they do in the event of extreme weather and how they support vulnerable customers.

“I want to thank everyone from SSE who took the time to meet with me today and to talk, particularly, about the way in which their Network Management Centre here in Perth works and the steps that they can take when things go wrong.

“Obviously, in a country like ours, the arrival of extreme weather can have an impact on electricity supply that none of us can do anything to prevent and when that happens it is important that the right decisions are made to get power back as quickly as possible.

“I was extremely impressed with what I saw today and, in particular, the steps that are taken to look out for their most vulnerable customers.”

“I’d like to thank Mr Wishart for taking the time to visit us and showing an interest in the work that we do here to keep the lights on across the whole of the north of Scotland. We’ve had an opportunity over the past few days to put our contingency plans into practice as we’ve experienced all sorts of weather from severe gales to snow blizzards and widespread lightning strikes.”

Mr Wishart also praised SSE for their commitment to being a Living Wage Company, saying:

“It is a personal ambition and priority for me to work towards ensuring that Perth becomes Scotland’s first living wage city and I am delighted that SSE, such an important employer here in our Fair City, is in the vanguard of that movement.

“SSE is the only energy supplier in the UK to be a living wage employer and in doing so, they are showing a positive lead to the rest of their industry and to business in general.  I trust that others will see the benefits that can come from such an approach and will follow SSE’s example.”