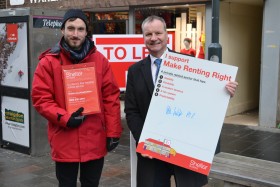 Mr Pete Wishart MP, SNP Member of Parliament for Perth & North Perthshire has welcomed a new campaign aimed at making Scotland’s growing private rented sector fit for families and fairer for all which was launched in Perth recently.

“Shelter Scotland’s Make Renting Right campaign aims to raise awareness of and build public support for reforming the outdated private tenancy regime which sees too many households forced from pillar to post on short-term rental agreements and I was delighted to be with them as they brought their campaign to the streets of Perth.

“A chronic shortage of affordable social housing – something which has been particularly acute here in Perth - has driven more and more people into Scotland’s private rented sector.  The Scottish Government and Perth & Kinross Council have been taking important steps to address the provision of social housing but they are facing a problem which has been built up over many years and simply cannot be sorted overnight.

“There are, of course, some very good private landlords out there but, as a whole, the sector’s outdated tenancy regime is not best suited to providing a safe and secure environment for people to put down stable foundations in their communities.”

“We want to see a private rented sector in Perth and across Scotland that is fit for families and protects all tenants – a sector that provides long-term homes, not short-term housing.

“Short-term tenancy agreements do not provide the stability and security that the more than 80,000 families with children living in the private rented sector need in order to live a settled life.

“Too often we hear of people being moved on, evicted or rents increased unreasonably, forcing people into the disruptive cycle of having to move house - every six months in some cases - preventing them from ever being able to put down strong roots and being part of a community.”

“In the 21st century, we need a private rented sector that is modern, stable, flexible, predictable and fair for those individuals and families that call it home.

“The benefits of reform would not just be felt by tenants, however.  Landlords too would see a more constant and predictable income with less downtime between rents and a more stable relationships with their tenants.

“That’s why we are asking people to support our campaign to positively reform the private rented sector and turn it into a place where the increasing numbers of people who rely on it can make a house a home and live with increased security and dignity.”

The Make Renting Right campaign from Shelter Scotland coincides with the Scottish Government’s consultation on proposals to reform tenancies in the private rented sector and builds on the charity’s previous campaigns in the sector.

Shelter Scotland’s key asks for reforming the sector include: