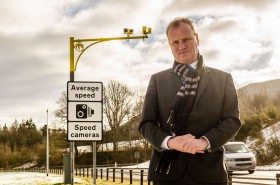 Perth and North Perthshire MP, Pete Wishart, has written to Danny Alexander asking him to drop his campaign to have the average speed cameras on the A9 taken down. This week’s statistics showed that accidents and speeding were down on the A9.

“The average speed cameras have reduced speeding and cut accidents and in every sense of the word they have been a success.

“My constituents feel more secure on this road and journeys on the A9 are now undertaken without the same sense of trepidation and fear. These cameras are working and that is why Danny Alexander must stop his campaign to have these cameras taken down. Taking them down now would be to expose my constituents to renewed risk and return this killer road to its former state.

“It is simply irresponsible and beyond belief that a UK Secretary of State could campaign to tolerate speeding and put people at risk. He must now apologise to the people of Perthshire and end this nonsensical campaign.”