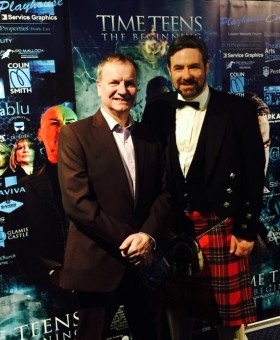 “What a fantastic night!  It was great to have a bit of red carpet glitz here in Perth for an absolutely wonderful celebration of a major film project that was made and devised in Perthshire and Angus by local people.

“Written and produced by Perth’s Ian Grieve and directed by Ryan Alexander Dewar from Forfar it was filmed on locations across Perthshire and Angus, featuring many local actors and was financed in the main through financial and in-kind sponsorship from local individuals and businesses.

“I really hope that Time Teens can highlight the potential for Perthshire as a location for further future film-making as well as showcasing the area’s desirability as a tourism destination.

“On top of all that it is a great film and I urge folk to take the opportunity to get out and see it.  Time Teens will be showing to the public at the Playhouse in Perth from the 20th to the 28th of February."