Perth and North Perthshire MP, Pete Wishart, has teamed up with his Parliamentary colleagues and a host of celebrities to record a charity single for the Jo Cox Foundation.

The single, which pays tribute to the work of the late MP, will be released on December 16 and aims to raise funds for the launch of the Jo Cox Foundation which has been established since her tragic murder. 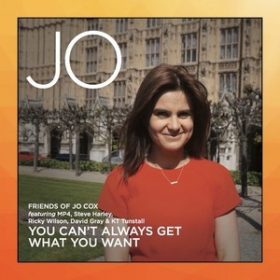 The song which is a cover of the Rolling Stone’s hit ‘You Can’t Always Get What You Want’ is intended as a protest song and will feature in the race for Christmas number one.

Commenting ahead of the single launch, Mr Wishart said:

“We were all knocked sideways by the tragic events surrounding Jo Cox’s death. It was a struggle to know how to respond in the first instance. I was privileged to be asked by the legendary record producer Robin Millar to come on board with my Parliamentary colleagues to record the music and vocals.

‘I really hope that the public get behind the single so that we can raise as much money for the Jo Cox Foundation as possible. The fact that so many people have given up their time for this project to support the causes Jo cared about, shows that she leaves us all a legacy of hope for a better world.”

“I am not really a political animal. But Jo Cox was a cut above and her legacy should be celebrated. Mrs Cox was a truly special person, and the more I learn about her life and work, the more deeply I admire her.”

“With Jo she was so obviously an incredibly bright light. It’s about coming together and doing something very celebratory in Jo’s honour.”