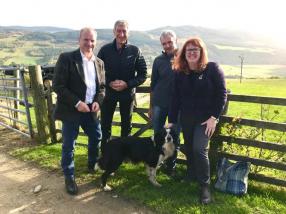 Farmers in Perthshire have been “badly let down” by the Tories and food producers are suffering from ongoing Brexit uncertainty, SNP MP Pete Wishart has said.

Pete Wishart said that the failure of the UK government to pass on money from the EU owed to Scotland underlined the danger of a Tory power-grab after Brexit.

Scottish farmers receive £580 million annually through the EU’s Common Agricultural Policy (CAP). The EU provided an uplift in funding as farmers and crofters in Scotland receive less per hectare than the EU average – but the Tories failed to pass the uplift on in full, short-changing Scotland by £160 million.

The UK government plans a power grab over agriculture – despite the Leave campaign promising that powers in devolved areas would automatically come to the Scottish Parliament after Brexit – raising fears of a repeated snub to Scottish farmers and crofters.

The National Farmers Union, Scotland (NFUS) have supported the Scottish Government’s position that all decisions affecting farming and food production in Scotland should be taken in Scotland.

“Brexit is an enormous threat to Perthshire’s farmers, who are deeply concerned over export markets, the future of farm support and ability to hire seasonal staff.

“The Tories simply can’t be trusted after their brazen cash-grab of EU money from the pockets of Scottish farmers.

“Scottish farmers have now endured 3 years of uncertainty about access to European markets for our beef, lamb and other produce.

"On top of that, there is now the risk of our domestic market being flooded with food imports that don’t meet any of the high welfare and safety standards we farm to.

“The European election is a chance to send a message to the Tories that Perth and North Perthshire doesn’t want Brexit. A vote for the SNP is a vote to make clear Scotland says No to Brexit and to protect Scottish farming.”