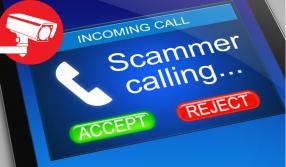 Recent examples of the scam include victims being contacted by someone purporting to be calling from SKY TV offering a cheaper deal and later calling back claiming to be from the persons bank claiming that the SKY call may have been fraudulent. In this instance, the victim was persuaded to make a bank transfer. Both calls were traced to the same fraudsters and were thankfully stopped by RBS in time to prevent £14,000 being transferred from the victims account.

“Police Scotland made me aware of the alarming rise in scam telephone calls which claim to be from banks and TV and internet providers. In recent weeks even my constituency office has been contacted by fraudsters claiming to be from BT.

“I would urge constituents to remain extremely vigilant and to take steps to make life more difficult for the fraudsters. This can range from simple steps such as terminating calls and calling back on telephone numbers you know to be genuine numbers, to more sophisticated technology such as call blocking services, which only let trusted numbers through.

“Most importantly, never give out any information over the phone which could give fraudsters access to bank accounts or access to other online accounts. Reputable companies who you deal with will already hold your information on file and will never ask you to transfer money to another account.

“If anyone is concerned that they or someone they know may have been scammed, they should contact Police Scotland on 101 or Action Fraud on 0300 123 2040.”